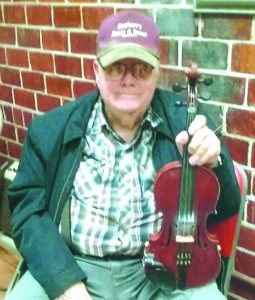 Charlie Wayne Cruson was born in rural Hardin County, Illinois to Dan and Addie (White) Cruson in the spring of 1934. His birth certificate lists June 9, 1934 as his birthday, although his mother, Addie, always insisted he was born on the sixth of June. He was welcomed by older brother Wesley and his only sister, Ellen. The Cruson family would later become complete with the birth of Charlie’s younger brother, Harold “Super” Cruson.
Charlie grew up and lived his entire life in the hills of extreme southeastern Illinois. As a young man, he enjoyed hunting and fishing with his brother Wesley. He attended Union school.
Charlie’s first job was at a gas station where he met his life-long friend Fritz Raines. Throughout their lives, Charlie and Fritz would create many wonderful memories traveling and moving buses all over the United States. Charlie’s profession was heavy equipment operator. He worked in the coal mines and also in construction until he retired when in his late 50s.
The Cruson family loves music and Charlie learned to play the fiddle as a young boy. As his musical experience grew, he would learn to play any instrument with strings. Charlie and his siblings were all taught by their mother, Addie.
Playing music with family, friends and professionally was one of Charlie’s life-long passions. His favorite songs to play were “Faded Love,” “Flop-Eared Mule” and “Red Apple Rag.” Some groups he played with were The Rhythm Rockets, The Ohio Valley Boys, The Schutt Family and Gospel Jubilee Singers. He was probably most well – known musically for his career with The Evangelaires with whom he recorded albums and traveled all over the Midwest ministering through music at revivals and church homecomings. Later in life, Charlie enjoyed playing with his brother Super, nephew Greg, son Larry and many friends at the Rosiclare and Eddyville jam sessions.
In addition to playing and listening to (especially bluegrass) music , Charlie also enjoyed wood working, watching westerns and working outdoors. He enjoyed fishing and riding his four wheeler but most of all enjoyed mowing his yard.
Charlie’s first son, Larry Wayne, was born September 12, 1955. Charlie enjoyed many years of making music with his son in formal music groups and then jam sessions later in life. Charlie often bragged of Larry’s ability to play true bluegrass music on the banjo. He was also very proud that his son was a Marine.
In 1966 Charlie met his forever love, Thelma Turner. She was working at the Dime
store and had car trouble. Charlie just happened to be at the right place at the right time to help her. They were married August 25, 1967. They shared a love and talent of music and a commitment to God and family.
Charlie and Thelma welcomed their son, David Glen, on December 4, 1972. Dave joined in the family music tradition as a boy but found that his true talent was in sports. Charlie was proud of Dave’s accomplishments as an athlete and in furthering his education. Dave and Charlie enjoyed attending live “professional” wrestling events, watching boxing on television and slipping off to enjoy a steak dinner while Thelma was working!
Charlie and Thelma’s first grandchild, Ira Daniel Cruson, was born in 1983. Charlie shared with Ira a love of music and fishing. Ira married Mirabela Danuta and they added the family’s first great-grandchild, Adelena Jean in 2017.
David married Micki Haney in 2002. Micki always had a soft spot for Charlie, and he for her. To Dave and Micki were born Charlie and Thelma’s two granddaughters – Madilynn Grace in 2004 followed by Cambell Elizabeth in 2008.
Charlie enjoyed watching his granddaughters play sports and celebrating special occasions and creating traditions with them. Madi and Cambell enjoyed many days of music, food and the occasional cat wrangling at Grandma and Papaw Cruson’s home.
Charlie Cruson had a long life of eighty-six years and ten months. It was full of music, travel, the outdoors, and the love of family and friends. On April 23, he passed peacefully at his home surrounded by his family. Waiting to welcome Charlie to his Heavenly home were his parents, Dan and Addie Cruson; brother,Wesley Cruson and wife Mary; sister-in-law Alma “Toots” Cruson and sister Ellen Carr and husband “Uncle Bill”. Left with special memories are his wife of 53
years, Thelma; his sons, Larry and David; grandchildren, Ira, Madilynn and Cambell; great-granddaughter, Adelena, brother, Super; many nieces and nephews; and many, many friends.
Services will be held on Tuesday, April 27, 2021 at 1:00 p.m. at Hardin County Funeral Service in Rosiclare, IL with burial to follow at Lavender Cemetery. Family will receive visitors from 11:00 a.m. until time of service at funeral home.
In lieu of flower donations can be made to Hospice of Southern Illinois. Hospice of Southern Illinois, 305 South Illinois Street, Belleville, IL 62220 .