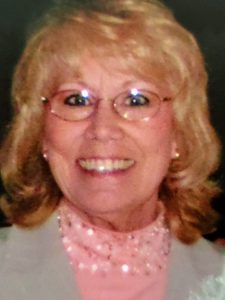 A Celebration of Life is scheduled for Michele (Potts) Tinault on Saturday, April 3, 2021, 2:00 p.m., at the First Apostolic Church, 1216 Division Street, Rosiclare, IL 62982. There will be a time of visitation and fellowship with the family beginning at 12:30 until Celebration time. The service will be officiated by Rev. Lowell “Butch” Gowins. If you would like to attend via Facebook Live, let us know so we can prepare accordingly.

Memorials may be made to the First Apostolic Church, P.O. Box 312, Rosiclare, IL 62982 or the Alzheimer’s Association.

Michele (Potts) Tinault was born on October 10, 1943 in Rosiclare, IL to Thomas Ray and Norma Lacy (Fowler) Potts. The sometimes shy but quick witted strawberry blonde was seventh in line of the eight membered inseparable group of siblings. There were five girls and three boys. While the Great Depression may have been ending, that news came a little too slow to their house in the Midway (Stone Church) area. But it was a tight knit community, never short on love or friendship. It was there that many of life’s memories were made.

Michele grew up and started school at the age of three. She walked down the hill from her home to the Stone Church Grade School and watched at the fence post as the school children played. A kind teacher, Mrs. Edith Perry, noticed Michele and asked her if she would like to join them, which she did. That was just the start of what would lead to her love of education throughout her life.

Michele and her mother, Norma, eventually moved to Fairview’s Spardale Apartments when Michele was in high school. She was a proud graduate of the Rosiclare Class of 1960. She served as Class Secretary, enjoyed cheerleading, played volleyball, was part of the Tatler Staff and played little sister, Midge, in the Senior Play “Class Ring.” She also played the bass drum along with her brother, Bill, in the Rosiclare High School Band. One of her highest honors was being chosen Basketball Homecoming Queen in 1960, as well. When talking or visiting about RCHS, she and her classmates would often recant about their Senior Trip to New Orleans. Boy those were the days!

Shortly after high school, Michele went on to marry her high school sweetheart, Ronnie Armstrong, and to this union were born the lights of her life: Rhonda, Tony and Darrick. She spent many a homemaker hour doting on them and taking them to piano and other school activities and practices. There were lots of hours spent at Armstrong’s Grocery, the Dari Dream, and with her sisters and their families. There were also reunions, long nine games and other gatherings, but her ever growing devotion to raising her children to know the love of God and where their strength came from was a constant. She was a Sunday School teacher and continued as a devoted member of the First Apostolic Church of Rosiclare.

Michele had a special knack for people and community. With a need to pursue personal endeavors and to help with family needs, she began to sell Tupperware and host parties throughout the community. She also worked for the community extension service and was a trusted assistant and friend to Hardin County Circuit Clerk, Juanita Thompson. Michele was also an excellent respiratory therapy assistant at Hardin County General Hospital before going to work for the State of Illinois Fire Marshal. She retired as a valuable member of the Illinois Emergency Management Team. During that time she helped many members of our IEMA communities throughout the region. Through some tough disasters Michele was instrumental and served as director for the region for a time. Through her tenure of work, Michele continued her love of education and received her BSN in Business. This was a personal goal, which was celebrated by her family, who were always proud of her many talents and accomplishments.
Her love of music and dance always brought her much joy throughout her life as a teenager at the Wagon Wheel to Cherry Street, where she met the last love of her life, Bill Tinault. There, they danced the Dance of Their Lives. They shared many happy years together raising children, grandchildren, and great-grandchildren. The family was blessed beyond measure.

Michele loved to travel and see what she called “The World” through her children as they lived their dreams. She instilled in them the ability to do anything they dreamed and wanted. She gave them the courage, drive, ambition and creative support whether she simply attended and cheered at ballgames, assisted in pageants and sometimes, literally making the dress. She was great at helping critique or even helping co-write a new song. No one could cheer louder at your performance, or watch your television clip, hear about a big hunt, listen to the next and greatest new invention or engine idea or wheels traded for more intently. She even helped plan ways to assist in the next campaign for public office. Her laughter was infectious at our house and yes, it was like a medicine that does our souls good.
She helped raise our babies, rock grandbabies, make calls and was ready to lend a hand on behalf of many. She was always praying, giving gentle guidance and correction and was always a shoulder to cry on.

Just as her Class of 1960 pet peeve suggested, she hated hiking on cold nights, so Michele flew from us toward Heaven on Friday, February 19, 2021 from Hardin County General Hospital.