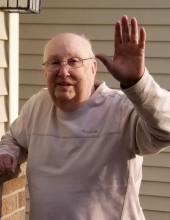 Clark Wallace, 79, of Cedar Rapids, formerly of Rosiclare, Illinois, passed away from a short illness on Tuesday, December 29, 2020, at St. Luke’s Hospital, Cedar Rapids. A Memorial Service will take place at a later date. Stewart Baxter Funeral & Memorial Services, Mount Vernon, is caring for Clark and his family.

Clark Randall Wallace was born December 9, 1941, in Rosiclare, Illinois, to Clarence and Mayme (Smock) Wallace. He grew up in Rosiclare, graduated from Rosiclare High School, and met Sharon Clark through a cousin at his grandmother’s house. They were married December 27, 1967, at Peters Creek Baptist Church in Elizabethtown, Illinois.

Clark joined the United States Air Force, serving 6 years. He retired in 2012, after working as a government contractor, mostly for Lockheed Martin. Clark traveled all over the world for work, and enjoyed visiting many places, especially Hawaii. Sharon especially enjoyed visiting Colorado with him to enjoy the mountains. Clark enjoyed watching westerns, Sci-Fi, and football, including the Rams when they were in St. Louis, and the Chicago Bears. Clark grew to love the Hawkeyes after moving to Iowa ten years ago. He introduced Tim to comic books as a kid, sparking his joy in collecting them. Clark was known to text a bunch, though he never perfected it. One of Clark’s favorite pastimes was trying to keep track of what his two granddaughters were doing each day. He will be missed by his loving wife, son, family, and friends.

He was preceded in death by his parents; and brothers, Bobby and David.

Memorials may be directed to Clark’s family.