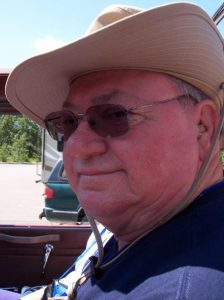 Gary Don Clevenger, age 71, was born July 11, 1949, at the old hospital in Rosiclare, Illinois. His parents were George and Sarah Mae (Walker) Clevenger. He departed this life Saturday, November 21, 2020, at Gateway Deaconess Hospital in Evansville, Indiana.
He was a member of the First Christian Church of Cave-in-Rock, IL, and Cave-in-Rock Masonic Lodge Number 444.
He leaves to survive him his wife of 28 years, Pam (Paradee) Clevenger of Cave-in-Rock, IL; his two sons, Gabriel Clevenger, Vienna, IL, and Gary Wayne Clevenger, Polo, IL. Other survivors are his siblings, Sally (Walker) Edwards, Coalmont, TN; John Walker, Cave-in-Rock, IL; Sherry (Walker) Clevenger, Elizabethtown, IL; Bruce Walker, Marion, KY; Sue Ellen (Walker) Gregory, Sturgis, MS; Georgiann Clevenger, Dixon, IL, and Linda Clevenger Deornellas, Byron, IL; plus numerous nieces and nephews.
He was predeceased by his parents, George William Clevenger, Sarah Mae Clevenger Walker; his brothers, Fred D. Walker, David A. Walker, Roger Clevenger, and Jerry Clevenger.
Gary graduated from Cave-in-Rock High School in 1967. He volunteered and enlisted in the United States Navy, January 26, 1968, during the Vietnam War era. During his service, he did multiple Mediterranean and Pacific cruises. One of his ports was Guantanamo, Cuba. His jobs included boiler tech, Master at Arms, and ship’s chemist. Some of the unusual events of his time in the Navy was a clandestine visit behind the “Iron Curtain,” being court-martialed and promoted in a single meeting, and taking classes in algebra and chemistry at Harvard University to fulfill the job requirements for ship’s chemist.
After discharge from the Navy, Gary moved to Dixon, IL. He arrived on Friday and started at Purity Mills on Monday. After working there for one year, Gary began work at Northwestern Steel and Wire in Sterling, IL. He worked at several positions at the mill, advancing to multi-craft millwright, and was a member of United Steel Workers. At his retirement, he had been at Northwestern Steel and Wire for nearly 30 years and worked as the inspector and planner’s senior union job.
Gary enjoyed being on board ship at sea. This carried over to multiple vacation cruises starting with a Caribbean cruise, then an Alaskan cruise, a Mediterranean cruise, and a Mississippi River cruise. For a change, Gary and Pam took a train trip from Chicago to Glacier National Park, then traveled by bus to six other parks in the west, returning by train from Colorado to Chicago.
On retirement, Gary and Pam moved back to Hardin County, where Gary achieved his lifelong dream of owning a farm. The small farm, half-timber and half fields, multiple ponds, and hilltop vistas gave him much pleasure; plus, a great place to hunt deer. He never needed more than one shot to bring down a deer, and he never had to track them down in the woods after that one shot.
Gary loved the outdoors. As an adolescent, he spent many hours hunting squirrels and rabbits to add to the dinner table. He could name any native species of tree not just by the leaves but also by the tree’s bark and shape.
After all his travels, there was no place as sweet as home, but this is not his home.

“This Is Not My Home”

A Memorial Service is planned for post-covid with a date to be determined.
In lieu of flowers, donations may be given to First Christian Church, Cave-in-Rock, IL.
Many, many thanks to our friends, neighbors, and family for their kind thoughts, deeds, and prayers. As Gary said, “I can feel them praying for me.”
The family of Gary D. Clevenger