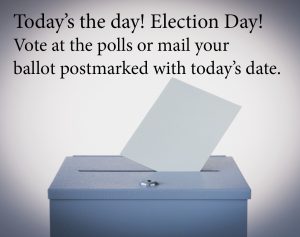 Mail-in ballots postmarked by Tuesday will be accepted if they arrive by Nov. 17

By JERRY NOWICKI
Capitol News Illinois
Although nearly 3.6 million Illinoisans had already voted by Monday morning, according to the Illinois State Board of Elections, nearly 2.3 million ballots are still to be cast if the state is to match the 70.56 percent turnout of 2016.

As of Monday, there were 586,709 mail-in ballots that Illinois voters had requested but not returned. As long as those ballots are post-marked by Tuesday, Nov. 3, they must be accepted by local election authorities if they arrive by Nov. 17 – two weeks after Election Day.

Those ballots can also be turned in at polling locations or deposited at official election authority drop boxes, which officials say are better options to ensure the vote is counted due to potential mail delays.

“If you still have your vote by mail ballot, you can do one of two things: Either bring it with you and vote in person (on Election Day)… or fill it out and bring it directly to your local election authority and check to see if you have a secure ballot drop box in your area,” Gov. JB Pritzker said at his daily news conference Monday. “Do not mail your ballot unless you take it directly to the post office and have it postmarked by (Election Day).”

“The Illinois State Board of Elections will regularly update the statewide totals for mail ballots on its website, but does not report any election results until it certifies the vote on Dec. 4. Unofficial results before certification may be obtained from local election authorities,” the Board said in a news release.

The Board warned that the graduated tax constitutional amendment question – which can pass if it receives 60 percent approval from voters who vote on the question or a simple majority of yes votes among all ballots cast – could take extra time to decide if the vote is close.

“Because of this formula, the fate of the amendment may not be known on election night even when accounting for mail ballots not yet returned,” the Board wrote.

Pritzker advised patience on races with national significance as well.

“Counting votes that arrived by mail is time-consuming work for our county clerks and their staffs,” he said. “With vote-by-mail hitting all-time records, that means that we have to be patient about the results of all races this year. It will possibly take until Wednesday or Thursday, or even Friday to get results for some races in Illinois and in states across the country, every vote must be counted, particularly on the national level. It is very important that we are patient with the presidential election.”

Pritzker said it’s “extremely important” that Illinoisans do not get their election news over social media.

“We know that there are foreign actors, specifically Russia, Iran and others who intend to promote misinformation throughout Election Day, and in the days after. They would like nothing more than to promote conspiracy theories and sow discontent,” Pritzker said. “If you want accurate information about the vote count, go to your local election authority’s website, or to the Politico website, or to the New York Times website where they track all the races nationwide or visit other reputable national news outlets.”

He urged news consumers to avoid reposting viral content they may see on social media.

“Look at a variety of news outlets if you like but be wary of claims you see on social media, foreign actors posing as Americans are producing disinformation, such as fake videos or fake official statements, hoping that you will repost it,” he said. “So check before you repost anything, or better yet, you may want to take the next few days off from social media. Facebook and Twitter will still be there in the morning.”

Also at his news conference, Pritzker was asked about Election Day security and the potential for unrest, and he noted the Illinois National Guard is “at a state of readiness,” out of “an abundance of caution.”

“We’ve made sure that our National Guard is simply in a state of readiness. We did this back during the few days before the ruling around Breonna Taylor. We want to make sure that that cities, counties that call upon us for help from the state of Illinois that we have those resources available to them,” he said.

On Monday, the Illinois National Guard tweeted that they did not have a specific mission. National Guard vehicles were seen staging at McCormick Place convention center in Chicago.

“Lots of people seeing (Illinois National Guard) trucks moving about,” the Guard wrote in the tweet. “While we can’t discuss the specifics of troop movements or future plans for security reasons, we can say that we do not have any missions and are just preparing in case we are needed. We join most others in hoping we aren’t.”