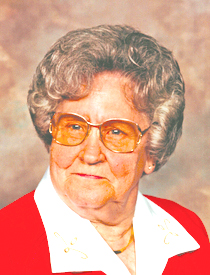 Wilma L. Vickery, 91, of Shawneetown, Illinois, died on Tuesday, September 1, 2020. She was born on September 2, 1928 in Rocky Branch. Wilma was the daughter of the late William and Pearl (Prather) Ambrose. She was a Baptist by faith.
Wilma is survived by her son, Robert Dean (Shari) Vickery of Shawneetown; three granddaughters, Devon (Joe) Marsh of Woodbridge, Virginia; Christy (Mitchell) Conkle of Elizabethtown, and Tammy Debout and Tony Duck of Gallatin, Tennessee; three great-grandchildren, Bradley, Boston, and Nathan; neighbors and friends.
She was preceded in death by her parents; her husband, Robert Leo Vickery; and her son, Thomas Jerrell Vickery.
Visitation for Wilma was held on Friday, September 4, 2020 from 9 a.m. until service time at 11 a.m. at the Vickery Funeral Chapel in Shawneetown. Reverend James R. Hubbard officiated with burial at Westwood Cemetery.