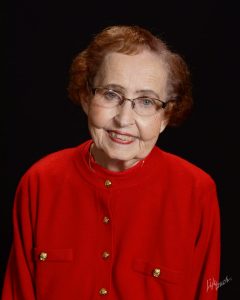 Elva Lea “Evelyn” Volkert (nee Shadowens), age 88, of Elgin, passed away peacefully on Wednesday, May 20, 2020, in Elgin, with her two daughters, Angela and Lucy, at her bedside. Evelyn was born July 6, 1931, in Rosiclare, Illinois, to her loving parents, Albert Alfred “John” and Mabel Glen Shadowens (Lanham).
Evelyn is a graduate of Rosiclare High School class of 1950. On June 5, 1950 she married the love of her life, Bernard “Bernie” Volkert. The pair resided in Rosiclare, before moving to Elgin in 1958. She was employed by Joseph Spiess Company department store in Elgin as a sales associate from 1965 to 1966. She then put her expert seamstress talents to good use when she began work as a special detail sewing machine operator at The Brody Coat Factory in Elgin. Many “Sycamore” brand coats passed through her capable hands until the company closed in 1973.
Evelyn then applied her attention to detail as an electronic wiring and soldering group leader for Motorola, Inc. in Schaumburg and its subsidiaries until her retirement in 1997.
After retirement, Evelyn joined the Saint Joseph Hospital Auxiliary and shared her talents as a hospital volunteer in the Gift Shop for over 17 years, accumulating over 2900 hours of volunteer service.
Evelyn was a 62-year member of St. Mary’s Church in Elgin, where she served as a member of the St. Mary’s Women’s Club. She, along with her husband, were also members of the Northern Illinois Bluegrass Association. Evelyn and Bernie would travel throughout the Northern Illinois region, as he played guitar and sat in on various “Jam” sessions with fellow Bluegrass Music enthusiasts.
Known for her love of gardening, Evelyn and Bernie would spend hours at their home, tending with great care to their flowers and vegetable garden. Evelyn also enjoyed cooking for her family. From her southern fried chicken, pot roast, ham or turkey with sweet potatoes, green beans, mashed potatoes, cole slaw and, of course, an array of pies and cakes made from scratch and hundreds of Christmas cookies her family would always look forward with great anticipation of a “Gramma Meal”
Evelyn is survived by two daughters, Lucy (Fred) Missele and Angela (Robert) Allanson; six grandchildren, Jill (Bill) Jaramski, Joy (Jim) McCarron, Jennifer (T.J.) Moore, Jeannine (Terry) McCarron, Crystal (Michael) Paunan, and Robert (Kristen) Allanson; and 13 great-grandchildren Mikayla Horn, Madison and Meara McCarron, Reilly, Owen and Piper Moore, Sienna and Sage Jaramski, Enya McCarron, Lily, Penny and Maddy Paunan, and Michael Allanson.
She was proceeded in death by her husband Bernie who recently passed away on April 29, 2020; her parents, one brother Lenard Shadowens and one sister Betty Griffith.
In accordance with COVID-19 social restrictions, private family Mass of the Christian Burial will be held on Wednesday May 27, 2020 at St. Mary’s Catholic Church Elgin, Rev Chris Kuhn officiating followed by burial at Mt. Hope Cemetery Elgin.
In lieu of flowers, memorials may be made to the AMITA Health Saint Joseph Hospital Elgin Auxiliary college scholarship fund for Elgin area high school graduates seeking a career in healthcare.
Funeral arrangements entrusted to the Symonds-Madison Funeral Home, 305 Park Street, Elgin IL 60120. For more information call 847-741-1128 or visit www.symondsmadison.com.