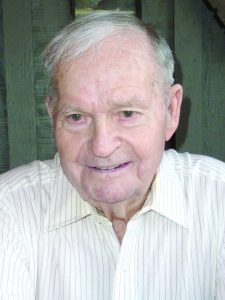 Truman Wilbanks, son of Carlos and Ina Wilbanks, born February 25, 1921 in Crittenden County, Kentucky, departed this life on April 10, 2020 at the age of 99 in Mesa, Arizona.

He is survived by his son Kenneth Wilbanks and his daughter-in-law Bernice of Manteno, Illinois;his daughter Kathy Drew and his son-in-law Arthur of Mesa, Arizona; and his half brother Wayne Wilbanks of Eldorado, IL. He also has six grandchildren that live in Arizona, Texas and Illinois and thirteen great-grandchildren that live in Arizona, Texas, Illinois and Wisconsin.
Truman served in the United States Army from September 19, 1942 to December 3, 1945 where he served under General George S. Patton. After leaving the service he started working in a furniture store in Rosiclare, Illinois for a while until he got hired at the Alcoa Mines in Rosiclare. After working for Alcoa for a few years, he quit and moved to northern Illinois where he joined the Carpenters Union and worked construction until he retired.
There will be a memorial service in the Glendale Cemetery which will be announced at a later date.

Soldier’s Prayer:
Do not stand at my grave and weep.
I am not there; I do not sleep.
I am a thousand winds that blow.
I am the diamond glitter on the snow.
I am the sun rippling grain.
I am the gentle autumn rain.

When you awaken in the morning hush.
I am the swift uplifting rush.
Of quiet birds in circling flight.
I am the soft stars that shine at night.

Do not stand at my grave and cry.
I am not there, I did not die.

Dad,
We love and miss you always…until we meet again.