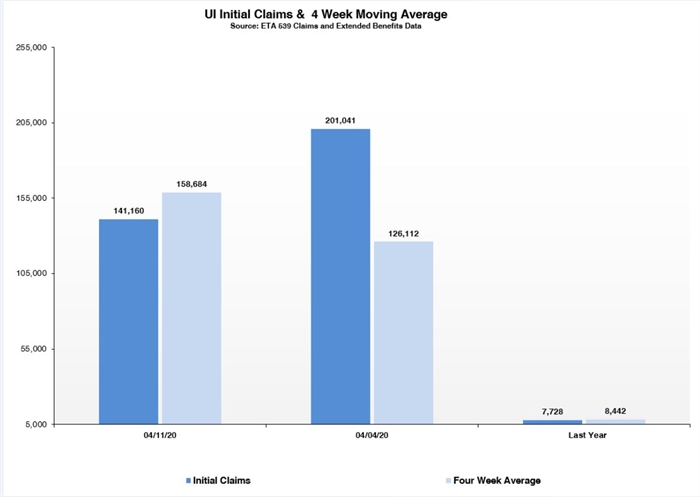 SPRINGFIELD — In the week ending April 11, another 141,049 Illinoisans filed initial unemployment claims, bringing the total number during the latest four weeks of the novel coronavirus pandemic to more than 634,000 in the state.

About 60,000 fewer initial claims were made last week than were made the week prior, bringing the four-week moving average to 158,656.

Since March 1, the state processed 12 times the number of claims it did in the same span last year and 5 times more than it did during the first six weeks of the Great Recession of 2008-2009.

Nationally, 5.25 million people made initial unemployment claims last week. That was a decrease of about 1.37 million from the week prior, but it upped the four-week moving average to about 5.5 million claims.

The numbers were released one day after Gov. JB Pritzker’s administration predicted the state will see a $2.7-billion revenue shortfall this fiscal year, which ends June 30, compared to previous estimates, and a more-than $6-billion budget shortfall next fiscal year, which begins July 1.

“You don’t have to be an epidemiologist to see that the virus is going to hit our budget hard,” Pritzker said at his daily COVID-19 briefing in Chicago Wednesday.

Also of note, Illinois does not yet have a system in place for independent contractors or those who are self-employed to file for unemployment claims despite a new federal law which allows for such claims.

Pritzker said Monday the state is contracting with the private firm Deloitte to get such services up and running, but the program is not anticipated to be “fully implemented” until the week of May 11.

State systems nationally have been unable to handle the unprecedented number of claims, and Pritzker admitted this week the Illinois Department of Employment Security’s filing systems “simply haven’t kept pace” with the increase.

House Republicans criticized the governor’s handling of unemployment claims earlier this week and said his administration did not act quickly enough to strengthen the system in anticipation of the increase that would result from his stay-at-home order.

The administration, however, said it overhauled the IDES website infrastructure, expanded web and call center capacity, worked with third-party vendors to enhance filing capabilities, and hired back recently retired employees.

Pritzker also said this week the IDES call center operates with a staff of 173 employees and that it recently updated its phone system to handle more calls. He also said the agency is establishing an outside call center with an additional 200 agents to field calls.

While Congress passed a $2 trillion stimulus plan three weeks ago to provide relief to businesses through the U.S. Small Business Administration, the more than $350 billion dedicated to that purpose had already run dry by Thursday.

That means a halt to the paycheck protection program, which is designed to avert layoffs during the pandemic by granting loans which can be forgiven if businesses maintain their payrolls.