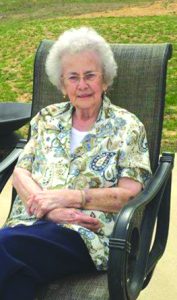 Lillian Alene (Upton) Stone passed away peacefully on Saturday, March 28th, 2020 in Hardin County General Hospital at the age of 92. Alene was born on June 16th, 1927 in Vienna, Illinois to the late Earl Roy Upton and the late Ruby Gladys (Walker) Upton. Alene was preceded in death by Jerry Edward Stone (husband of 59 years), Charles Colmore Upton (brother) and Sarah Marie Birkner (granddaughter).
Alene was devoted to her husband and her family. She is survived by five children: Mike (Jacquelyn) Stone of Cheyenne, WY; Bob (Mary) Stone of Cape Girardeau, MO; Kathy (Tom) Birkner of Belleville, IL; Cindy (Herbie) Henderson of Golconda, IL and Pam (John) Agin of Harrisburg, IL. Sixteen grandchildren and seventeen great-grandchildren had the good fortune of calling her Grandma. She was also cherished by numerous nieces, nephews, and extended family.
Alene cherished her role as a mother, grandmother and homemaker, but she was much more than that. Alene served as bookkeeper for Stone Drugs, was an active member of the Rosiclare United Methodist Church and participated in various organizations such as PTO, Girl Scouts, United Methodist Women and Home Extension.
Alene lived an active live. She enjoyed camping, hiking, growing plants/flowers, travelling with her friends and family and square/ballroom dancing. Alene also used her creative and artistic talents to create needle point Christmas stockings and quilted Christmas tree skirts, which her children and grandchildren still use and cherish. She also loved animals, growing plants and flowers and working with paints and chalks, made hollow egg art creations and countless cross stitch pieces. Her final act of creativity and giving was realized through her involvement in “Hearts 4 Babies”, which provided handmade clothing, blankets and other supplies for underprivileged and at-risk infants throughout Southern Illinois and Western Kentucky.
Alene was a kind and selfless woman, whose faith and devotion served as an example to others. Our world is slightly darker today with her departure, but we are thankful to have had her in our lives and are comforted by the fact that she and her beloved husband, Jerry, have been reunited.
Memorials may be made to Rosiclare First United Methodist Church, PO Box 598, Rosiclare, IL 62982.
Services will be conducted at a later date. 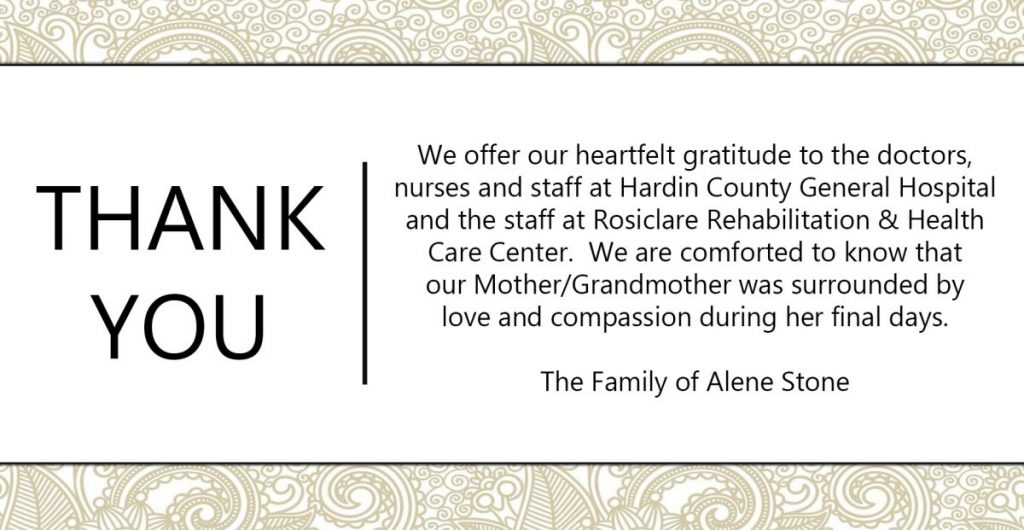