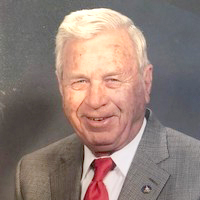 William Andrew Clanton entered into eternal rest and reunion with loved ones January 20, 2020. Born to John and Gladys Clanton at Rock Creek, Illinois June 19, 1931 in a large farm family of four daughters and seven sons.
Bill is preceded in death by his parents, wife Gladys Faye Frailey, youngest son Michael Paul, oldest daughter Deborah Elizabeth, and oldest son, Terry Wayne.
He is survived by three brothers, Joseph, Daniel, David; and sister Martha. Surviving children include Barry and Ivonne Clanton, James and Teresa Clanton, Charles and Deborah Clanton, Carla and Jeff Fleming, and Rebecca and Darris Lewis. Blessed with 14 grandchildren: Matthew, Angela, Amanda, Katherine, Karla, Michael, Kristen, Andy, Melissa, Jessica, Jennifer, Lacey, Travis, Savannah; 13 great-grandchildren; Lucas, Kailyn, Westin, Logan, Hailey, Gabriella, Rosalina, Maxim, Simeon, Giana, Jackson, William, Tucker and many precious in-laws, close friends, and “hunting buddies”.
He attended a one room country school with one teacher for all grades 1 through 8 until an expansion in the 5th grade thus making a 2 teacher school. Eighth grade graduation earned him the right to walk 8 miles with his older brother and a neighbor boy to a consolidated graduation ceremony for the entire county held at the county seat of Elizabethtown, Illinois. In 1948 he graduated from Cave-In-Rock Community High School at age 16, the youngest of his class of 28 graduates. This event was celebrated with a dinner of pot roast keeping the bone with “1948” carved on the side by his dad; one of many keepsakes kept for over 72 years.
Bill entered the Air Force in November 1948 retiring in 1969 as a Master Sergeant at Tyndall AFB in Panama City, Fl. His military career took him overseas to Japan and Korea; stateside service included two tours in Alaska, Alabama, Indiana, and Florida. Offered a GS-9 position back in Alaska after retirement and returning to snow on the ground in May after a Florida visit caused him to rethink his next career and return to the snow white sand of Panama City Beach where he and others purchased Open Sands subdivision for housing development, building his own home there in Open Sands and continued to build there and in other areas of Bay County with numerous houses, apartments, condos, restaurants, and offices to his credit. Bill was one of the founders of the local Home Builders Association and promoted the first Parade of Homes in 1976. Bill served for several years on the Contractor Competency Board for the City of Panama City Beach.
While stationed at Maxwell AFB near Montgomery Alabama he petitioned and was accepted in Prattville Lodge # 89 where he was raised to Master Mason in March 1962. He demitted to Pythagoras Lodge # 358 in the early 80’s at Panama City Beach where he served through all stations and was Worshipful Master in 1988. He was also a member of Eastern Star, York Scottish Rites and Past Master Unit.
Created as a Noble in September 1970 by Hadji Temple joining the Hot Rod Unit in 1972 and served as President in 1976. Served as a member of the board of Panama City Shrine Club and had hands on experience in building the present Mosque. He was appointed Captain of the Guard of Hadji Temple in 1985 and 1st Ceremonial Master the same year for Shaddai Temple. Reelected each year then serving as Potentate.
Remembered as a dependable builder, friend, father, and husband and enjoyed his bird hunting days, collecting old shotguns and of course country music. Very proud of his kids, grandkids, and great grandkids never hesitating to show pictures or brag of their latest accomplishments and talents. Bill Clanton is missed by all but remembered lovingly as a plain spoken, solid citizen always putting family ahead of self, handshakes as the only honor needed and giving encouragement before chastisement. His legacy includes simple four letter words, Love, Work, Rise (as in “get up”!), and a never give up attitude. Rest and enjoy your special place and we will meet you at the River.
Arrangements provided by Paul Funeral Home, Beaufort County, NC. Locally, funeral services be held at Hardin County Funeral Services in Rosiclare, Illinois at 2:00 p.m., Saturday, January 25, 2020. A visitation will begin at 1:00 p.m. that day and last until service time.

Special thank you to Dr. and Mrs. Ronald Lather, Reverend and Mrs. Wesley Taylor, Joe Bennett family, friends of “down in the county” and community, as well as friends of White Hill Church.
In lieu of flowers the family requests donations be made to Shriner Hospitals for Children in memoriam of Dad’s contributions to the care of his special kids.