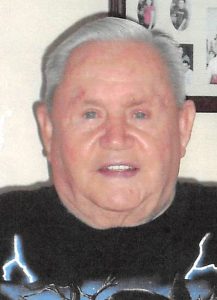 Edward Allen Leonberger, better known as “Bubby”, 87 years young, of Rosiclare, IL, but formerly of Gallatin County died, Thursday, January 16, 2020, a little after 11:00 a.m., at the Rosiclare Rehab and Health Care Center. Bubby was born near Sparks Hill on December 13, 1932 to the late Allen and Virgie (Thorne) Leonberger. He served his country in the U.S. Army in Korea.
Bubby was the best brick mason around, he lived his life the way he wanted, he loved to eat, fish, dance and drink cold beer. He loved all the women. He always had something to say, and wasn’t afraid to voice his opinion (and he was always right).
Bubby is survived by his son, Dennis (Donna) McCall of Texas; daughters, Melanie (Dan) Richardt of Elizabethtown, IL and Meshea (Darren) Crysup of Washington; nine grandchildren, 15 great-grandchildren; two great-great-grandchildren; one brother, Billy Leonberger of Florida; two sisters, Ada Hollobaugh and Shirley Capeheart of Shawneetown; brother-in-law, Galen Lamb; special sister-in-law, Ginny Leonberger; his Rosiclare Rehab family, and many nieces, nephews, and friends.
He was preceded by two sisters, Patsy Heffington and Shelby Lamb; and a brother, Grover Leonberger.
As he did in life the family will try to honor his wishes in death. A graveside service preceded burial, on Saturday, January 18, 2020 at the Westwood Cemetery in Shawneetown at 2:00 p.m. A Celebration of Life will be held at a later time.
You may leave a note of comfort to the family at www.coxandson.com .