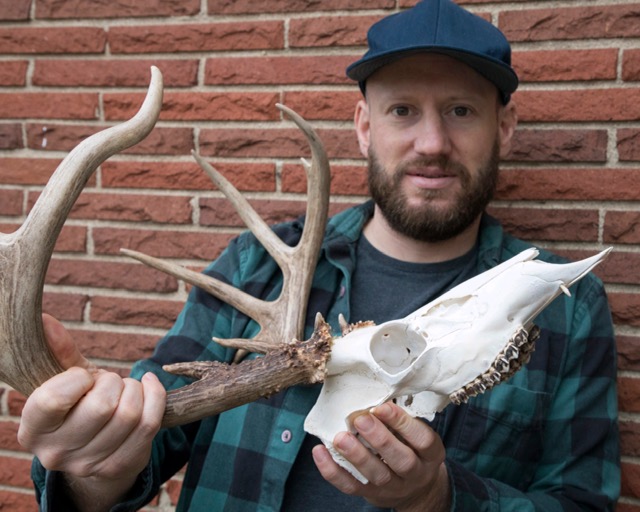 Alan Rovge, Geneva, IL, harvested a one-of-a-kind whitetail buck during a hunt in Hardin County. He visited southern Illinois during the first firearm season of 2019 and hunted on private land owned by Marty Canfarelli near Bassett Road.
Rovge was pleased with his 11 point buck and once back home in the Chicago area, he decided to properly display his prize with a European style mount. When the flesh was removed and the full maxilla of the deer was exposed, he noticed the deer had one upper canine tooth. Lower canine teeth are normal in deer.
After doing some research, Rovge found that it is very rare to find a deer with this kind of tooth. One study by C.W. Severinghaus suggested that only about 0.01 percent of deer would be found to have upper canine teeth.
The upper canine teeth are often referred to as tusks, ivories, whistlers, buglers, eye teeth or dog teeth in male and female elk. These upper canine teeth are thought to be the remnants of prehistoric tusks.
Ancestors of these animals used them for protection. Some articles suggest that deer may have been more carnivorous in nature, like eating small birds. It is thought that the animals evolved larger antlers and smaller canine teeth over thousands of years.
Whatever the case may be, after your next harvest you might find a one-of-a-kind whitetail if you take the time to peek at its uppers.
To read more about canine teeth in deer, visit https://www.naturallynorthidaho.com/2014/01/white-tailed-deer-skull-yields-rare.htm or check out “Biology and Management of White-tailed Deer,” edited by Dr. David Hewitt