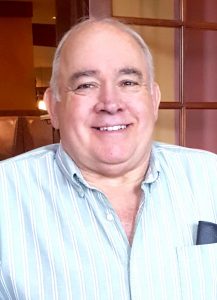 Jerry Ray Haney was born on March 15, 1953 in Fairfield, Illinois to Tom and Lucille Haney. Tom and Lucille raised their family on the farm, in the Central Community, where Jerry enjoyed the rest of his life, raising his own family there.
On September 25, 1971 Jerry married Kathy Winters and they were blessed with three children Jennifer, Micki and Taylor. He was a proud and adoring “Pops” to Hannah, Madi and Cam.
Jerry worked in the Fluorspar mines alongside his brother, Larry for many years. After the mines closed, Jerry started working at the Job Corps, where he met and made many friends before retiring in 2018.
Jerry was an entrepreneur by nature. He along with his brother, Dale, established the E’town River Restaurant and ran it for several years before selling.
Jerry loved hunting and made lifelong friendships when he built Arrowhead Lodge and continued running it after his retirement.
Jerry is survived by his devoted wife of 48 years, Kathy; daughters, Jennifer (Jimmy) Bass of Mt. Vernon, IL, Micki (Dave) Cruson of Equality, IL; son, Taylor (Christian) Haney of Jonesboro, IL; granddaughters Hannah Lincoln, Madilynn Cruson and Cambell Cruson; sister, Lynda (Steve) Palmer; mother-in-law, Hazel Winters; sisters-in-law, Layla, Rosalee, and Debbie; and a host of relatives.
Jerry was preceded in death by his parents Tom and Lucille Haney; brothers, Richard, Dale and Larry; and father-in-law, Theodore Winters.
Jerry had an appreciation for the outdoors. He always busied himself around the house, tinkering with his Allis Chalmers tractors, mowing, working with Kathy in the garden, or helping neighbors when they needed it. He was always looking and planning for his next project.
Jerry’s proudest moments were supporting his girls in the stands and always having a pocket full of dollars for concession stand runs.
Jerry was a family man and it showed through the years by hard work and providing for his family. Although his health failed him in recent years, Jerry never lost his zest for life.
Memorial services were held at 2 p.m., Monday, January 13, 2020 at Hardin County Funeral Service in Rosiclare, IL. Rev. Harold Miller officiated the service. The family received visitors from 11 a.m. until service time at the funeral home.
Memorials may be made to HOOAH Deer Hunt For Heroes, P.O. Box 351, Stanford, IL. 61774.