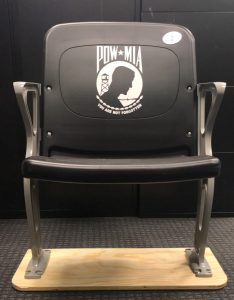 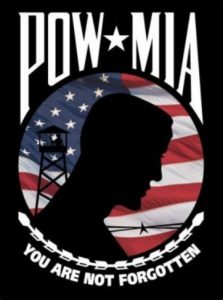 A POW/MIA ‘Chair of Honor’ ceremony will be held Saturday to remember those American heroes who went off to war and have yet to return home. These heroes are considered missing in action (MIA) or may be prisoners of war (POW). Their remains have not been recovered and their whereabouts are unknown.
Since World War II, over 80,000 Service Members are still listed as Unaccounted For nationwide. They need not be forgotten.
A POW/MIA Chair is being permanently placed in each of the following towns and a ceremony will be held in each town Saturday, November 9, at these times:

Rosiclare 11:00 a.m.
At the Veterans Walkway at the rear of the Fluorspar Miners’ Memorial, Main Street

Rolling Thunder, Chapter 3 has donated the chair and materials. The group will be holding the ceremony in coordination with area mayors/city officials. The public is encouraged to attend.

About Rolling Thunder: Incorporated in 1995, Rolling Thunder, Inc. is a class 501(c) (4) non-profit organization with over 90 chartered chapters throughout the United States and members abroad. While many members of Rolling Thunder®, Inc. are veterans and many ride motorcycles, neither qualification is a prerequisite. Rolling Thunder®, Inc. members are old and young, men and women, veterans and non-veterans. All are united in the cause to bring full accountability for the Prisoners Of War-Missing In Action (POW/MIA) of all wars, reminding the government, the media and the public by our watchwords: “We Will Not Forget.” 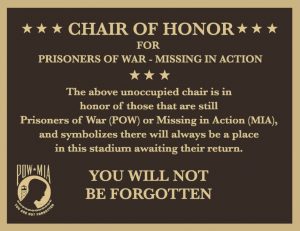