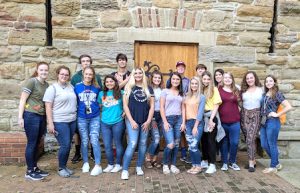 On Thursday, October 10, students in Ms. Fowler’s and Mr. Jones’ history classes traveled to Indiana for a tour of historic New Harmony, IN. The town is located fifteen miles north of Mount Vernon and was the site of two social experiments. Although neither experiment could be considered a success, New Harmony today draws many visitors to learn about the ideas, dreams and visions of those early settlers and to view the beautiful gardens and grounds that were so painstakingly planned and developed.
The town of Harmony was the first founded in 1814 under the leadership of German immigrant George Rapp. It was the second of three towns built by the communal religious group known as the Harmonists. Within two years the Harmonists had acquired 20,000 acres of land and built 160 homes as well as their church, saw and grain mills, tanneries, and woolen and cotton mills.
The town of Harmony flourished for ten years, but in 1824 the Harmonists boarded a steamboat and headed for Pennsylvania, where they founded the community of Economy. In 1825, the Harmonists sold their entire town, land and buildings to Robert Owen, a Scottish social reformer who planned to use his “new” Harmony as a model community for communal living and social reform.
Robert Owen was passionate about his vision for New Harmony. In 1826, the town adopted a new constitution, “The New Harmony Community of Equality”, with the objective of achieving happiness based on the principles of equal rights and equality of duties. Work was divided into six departments: agriculture, manufacturing, domestic economy, general economy, commerce and literature, science, and education. Each department had its own superintendent. Although the constitution contained worthy ideals, it did not determine how this community would function. By 1827, after several attempts to reorganize, the utopian experience was declared a failure and dissolved. Tracts of land and property were sold for private use.
Today, many of the town’s old Harmonist buildings have been restored. Students were able to tour the Athenaeum Visitor’s Center, The Rapp-Owen Granary, the West Street cabins and Oculist building, the Dormitory #2 in which men and women lived in separate quarters but shared a common dining room, the Roofless Church still used today, the David Lenz house and garden, the Workmen’s Museum which displayed samples of fluorspar from Hardin County, and the Labyrinth.
Students asked the tour guides lots of questions and were especially interested in the artifacts, the buildings, and the lifestyle of the Harmonists. Many students stated that they hope to revisit New Harmony in the future.