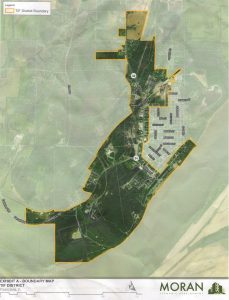 The Rosiclare City Council held a Public Hearing Tuesday, October 15, 2019 at City Hall to better inform Hardin County citizens about the proposed Rosiclare Tax Increment Financing (TIF) Redevelopment Plan and Project that has been in the planning stages for the last two years, but more intensely in the past eight months. Those present were given a map of the proposed TIF area.
Mayor Roy Tolbert introduced Keith Moran of Moran Economic Development who is an advisor hired by the Rosiclare City Council to guide the board through TIF establishment and administration process.
Moran led the Public Hearing, answered questions, and briefly explained how and why Rosiclare is eligible to develop a TIF district. Moran explained his role in the process and shared that he has assisted TIF districting in other Southern Illinois towns including Harrisburg, Eldorado, and Carrier Mills.
The TIF district being proposed for Rosiclare involves 238 contiguous parcels and will have a 23 year term. Though the focus of the program is to recruit businesses, retain businesses, and improve infrastructure in the downtown and riverfront areas, residential areas are included since the parcels must be contiguous. Some residential areas may be converted to commercial or office type properties if desired.
“The TIF program is one of the last remaining economic development tools that communities have at their disposal to help correct some impedements to development,” said Moran. “Just because you’re in a TIF, there’s no tax increase whatsoever.”
Moran explained that the purpose of creating a TIF district in Rosiclare is to attract new businesses while giving owners some sort of incentive through a tax rebate Click Here to read more