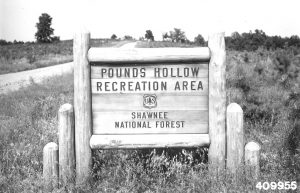 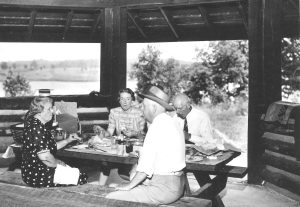 The Shawnee National Forest will soon kick off a year of special programs to commemorate the 80th anniversary of being proclaimed a national forest. The first of a several programs will take place in the town where it all began, the home of the first Shawnee National Forest office in Harrisburg, Illinois. A celebration of the only national forest in Illinois the free program will be held in the Harrisburg Public Library on September 5th at 6:30 p.m. The program includes a presentation by Mary McCorvie, Heritage Program Manager about the early history of the Forest, as well as a special showing of a historical film featuring the Shawnee National Forest.
A re-release of The Land Changes a film produced by the U.S.D.A. Forest Service and first released in 1957 will be shown. In it a newspaper man explains how worn out farmland can become an asset. The film tells the story of how worn out land on the Shawnee, Hoosier and Wayne National Forests in the Ohio River Valley was improved through reforestation, protection and proper management. Both starring roles were played by Shawnee National Forest employees; Leonard (Len) Farmer, a clerk and dispatcher at Elizabethtown Ranger Station, played the newspaper man, while Lindal Roberts, a forestry aid, worked in the Jonesboro Ranger Station. The 1957 film will be accompanied by a showing of short vignettes highlighting the early Ozark Tours led by L.O. Trigg. Light refreshments will be served following the program and are made possible via donation.