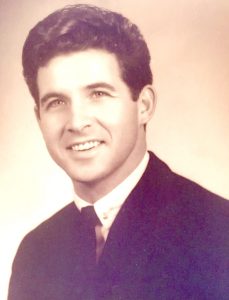 Charles R. “Itchy” Mitchell, 81, of Metropolis passed away on Tuesday, July 16, 2019 quietly at his home.
Mr. Mitchell was a registered pharmacist and a member of First United Methodist Church in Metropolis. He was a good husband, father, friend, and brother. Should you go first and I remain, each thing you’ve touched along the way, it will remind me of your memory of your helping hand. Please walk slowly down that long, lonely path.
Charles was united in marriage with Anne Janet Searles on July 22 1958.
Those who are left to treasure his memory are his family, his wife, Anne Mitchell; two sons, Tim (Jamey) Mitchell and Joel (Jualanna) Mitchell; one daughter, Twila (Patrick Dresser) Mitchell; son, Glenn (Toni) Wright; three brothers, Murriel Mitchell, James (Boopie) Mitchell, Pat (Judy) Mitchell; eight grandchildren, Cody, Laken, Dylan, Claudia, Sara, Alexis, Logan, Beau; three great-grandchildren, Brayden, Kylie, Keaton; and several nieces and nephews.
He was preceded in death by his parents, James Mitchell and Ione Douglas Mitchell; and one brother, Maurice Mitchell.
He will be cremated per his wishes and a private family gathering will be held at a later date.
“The purpose of a life, is a life with purpose. “
“To live in hearts we leave behind is not to die. “
Memorial contributions may be made in his honor the Weekend Blessings Children’s Food Program in care of the First United Methodist Church at 100 E 5th Street Metropolis, IL 62960.
Online condolences may be left at www.lindseyfuneral.com . Lindsey Funeral Home of Paducah is in charge of arrangements.