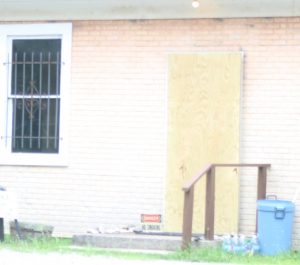 Boarded up main entrance door after thieves break in.

The American Fluorite Museum in Rosiclare, IL recently encountered more bad luck since the devastating furnace fire back in February 2019 that closed the museum doors. On Saturday, June 15, museum board member and volunteer Gwynn Johnson discovered the the museum had been broken in to. Johnson immediately called local law enforcement to the scene, sparking an investigation of several stolen fluorite specimens. The Illinois State Police Investigator arrived on scene the same day to get all details and assess the building and its surroundings for finger prints and any other evidence.
Roy Jackson, museum secretary and treasurer, was available to give the Independent information about the break-in. He said that it appeared that the entry point for the robber(s) was the front door. He believes someone used a rock to bust out the glass on the door. The glass was plexiglass and appeared to have been weakened from heat, possibly even from the hot weather. After entry was obtained, the intruder(s) went to a display case and busted the glass, taking at least 8 specimens, most of them being blue. Light blue fluorite is less common which also means it has a higher monetary value. Jackson said that one of the stolen specimens was worth at least $15,000 alone and the total value of all the pieces was probably at least $20,000 – $25,000. No one was allowed to enter the building as an active investigation is underway.
Museum President Wesley Atkinson stated he feels the perpetrators were local people who knew exactly what specimens to take. The items were small enough to be carried out and were very valuable in both monetary and historical terms. Atkinson said the sheriff and local law enforcement have already put hours upon hours of work into the investigation and have been very committed to finding the specimens and the person(s) responsible. The Illinois State Police Investigator was able to collect some possible forensic evidence that could be helpful in finding the culprit. Even though there are no suspects yet, both Atkinson and Jackson feel confident that an arrest will be made very soon.
The American Fluorite Museum has been closed since February when the furnace blew up, causing fire, smoke, and soot damage throughout the whole building. The museum board thought the museum was well insured, but when the fire occurred they found out that there was only liability insurance that covered very little. The museum board members have been waiting on funds from donations to get a professional cleaning company in to rid the residue. Unfortunately, it hasn’t happened yet due to lack of funds. They had hopes of re-opening the museum this summer but are now looking at opening next summer, if they get the donations they need.
Pieces of Hardin County’s Fluorspar Mining history have been stolen in this incident. The cash value of these items probably does not even equate to the emotional and historical value that the stolen specimens held. The beautiful specimens were mined in Hardin County many years ago and have been passed down through families of former miners. Rosiclare was once the fluorspar mining capital of the world. Many miners spent much of their lives in the local shafts and sadly, several miners lost their lives there too.
There is a $1,000 reward being offered for information leading to the arrest and conviction of those involved in the robbery. Please contact the Hardin County Sheriff’s Department at (618)287-2271 if you have any information. If you would like to help the American Fluorite Museum there is a GoFundMe page that was created after the fire. Visit https://www.gofundme.com/help-repair-the-flurospar-museum to make a donation. You may also contact Museum President Wesley Atkinson at (618) 841-1062 or Museum Secretary/Treasurer Roy Jackson at (618) 285-3367.