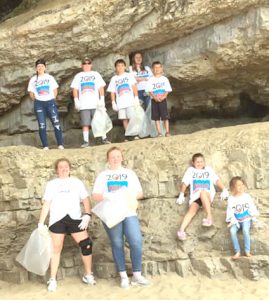 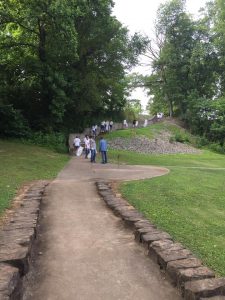 Several groups of volunteers gathered to clean up the Hardin County banks of the Ohio River in all three towns, Cave In Rock, Elizabethtown, and Rosiclare as part of the 30th Annual Ohio River Sweep last Saturday, June 15, 2019.
Pictured above is the Cave In Rock team led by Ron and Barb Schierbaum. The Schierbaums travel from Bluford, IL to volunteer each year.
In Rosiclare, Nicholas Shockley, Nathan Shockley, Joey Lewis, Gwynn Johnson, and Bryan and Diane Stone volunteered collecting several bags of trash.
David Griswold, Bob and Rosemary Riley, Becky Barnard, and Harve and Rachel Hurford were some of the locals who volunteered to clean up the river bank at Elizabethtown.
Griswold even got a couple of tourists with kids and a few Hog Rockers to join in. Griswold approached the tourists with kids at the Rose Hotel. He gave them two shirts for their kids, along with a quick version of ‘the speech’ he presents to anyone who walks by during the Ohio River Sweep. He talks about civic responsibility and how we all should refrain from throwing trash in the streams. When Griswold went back to the shelter he noticed his “speech” worked. The littlest child was picking up litter as they walked back up the street towards the bank.
Over the decades that he has volunteered for the Ohio River Sweep, Griswold said he’s noticed a change in the amounts and types of trash recovered. He says most of the trash seems to be shore generated, everyday litter from people leaving trash behind at the park.
“I see this as a good thing, said Griswold. “It means the river itself has less trash than ever, but also means we could be doing a little better ourselves.”
Griswold said that the turn out has been low over the past few years, but believes that educating kids about the effects of littering may be key.
“I believe the real value of the event probably occurs during the poster competition, the education portion that happens in schools,” said Griswold.
The Poster Contest, held in conjunction with the Ohio River Sweep, is one way to spread the word about litter prevention. It helps to create an awareness of water quality problems caused by litter and illegal dumping. Often schools incorporate this in their lessons.
The Ohio River Sweep is a volunteer, riverbank cleanup that extends the entire length of the Ohio River and beyond. This is the largest environmental event of its kind and encompasses six states and 3,000 miles of shoreline that extends from Pittsburg, PA to Cairo, IL.
The volunteers for the Ohio River Sweep have made tremendous progress cleaning the Ohio River. Yet, litter continues to be a global problem. Volunteers make a positive impact in the Ohio River watershed by participating in the Ohio River Sweep.
Litter, especially plastics, in our rivers and ocean is a significant problem. The Ohio River Sweep is a critical event to remove plastics from our rivers before they enter the ocean.