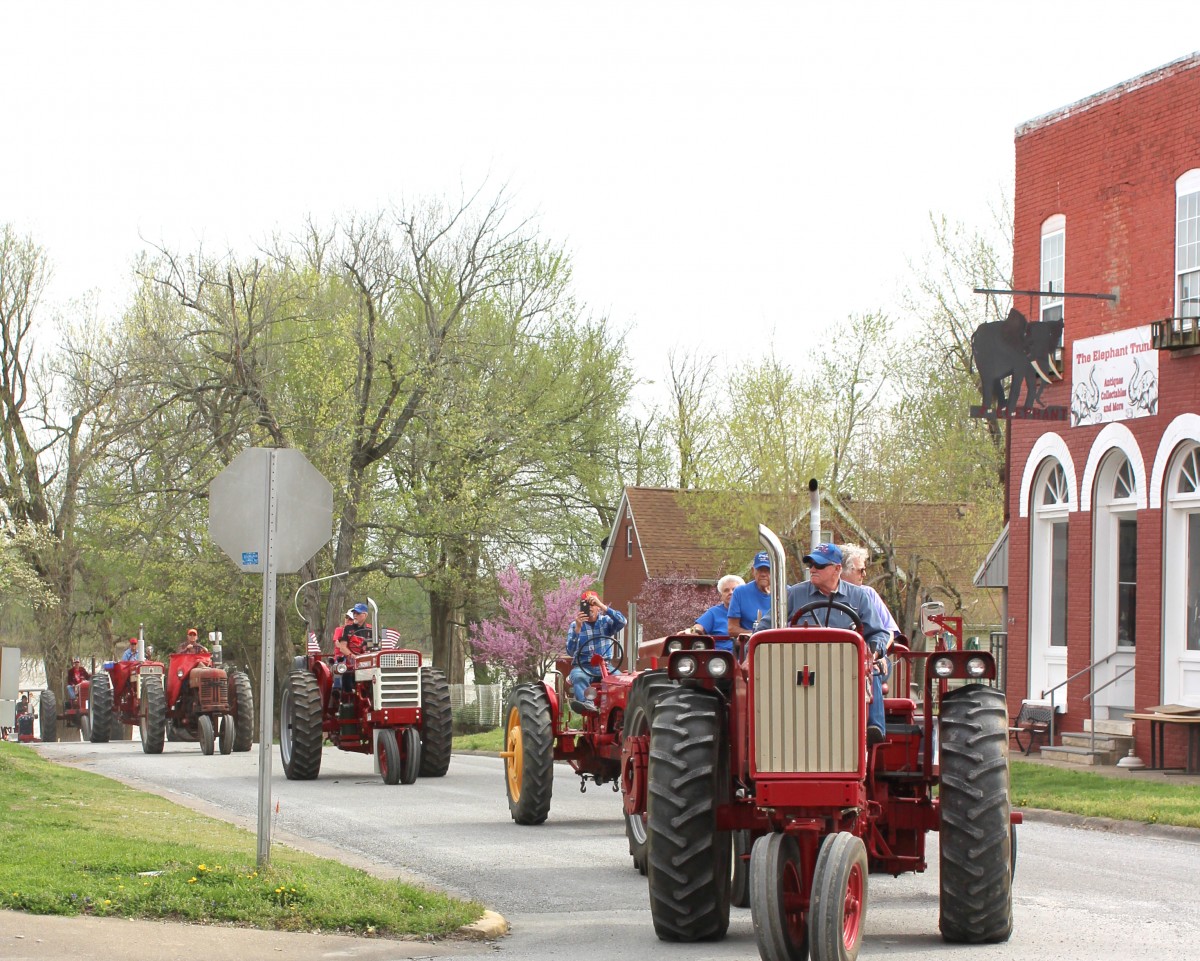 By Jennifer Lane
Editor
A very friendly group of tractor enthusiasts, men and women, gathered together at the Cave In Rock State Park Lodge to begin their weekend of tractor riding in Hardin County last week. The group was still not complete with others traveling to join them.
This is the third annual tractor run they’ve made through Hardin County. The first year they visited at the end of April and the second year they visited in the fall. This year they arrived in Hardin County just as the Red Buds and Dogwoods came into bloom.
When asked if they were the same group that visited last year, one lady piped up with humor, “Yes, but without the green tractors this year!” Members come from surrounding states, some driving up to eight hours. The group has traveled together to a variety of places throughout the midwestern part of the country.
Their restored tractors range in years from the 1930s through the 1960s. Since the tractors only go about 15 miles an hour, the group takes secondary roads when possible.
Thursday, the group planned to ride about 23 miles, 70 on Friday, and 40 on Saturday. During part of there trip they cross the Cave In Rock Ferry over into Kentucky.

Previous story from May of 2017

Members came from Illinois, Kentucky, Indiana, and Iowa. It was about an eight hour trip for some. They are calling this their First Annual Tractor Run in Hardin County — hopeful to come back again next year. They have been planning rides like this since 2002.
I talked with Jerry Snedecor, from Bonfield, IL, who was dubbed the leader/planner of the group. His wife was also along for the trip. He has ties to this area, living in Eldorado many years ago. He remembers spending time in Hardin and Pope Counties and hadn’t been here in over 50 years. He and a friend visited Hardin County in March to plan this trip.
On Friday, the group took a 68 mile trip throughout Hardin County. They planned to take a 38 mile ride in Kentucky on Saturday. When I asked what do you do when it rains, Snedecor replied, “We put on our rain pants and keep riding.”
When asked where they visited, Snedecor named Garden of the Gods and High Knob. Another tractor enthusiast piped up and said with humor, “Who knows where we were? Sometimes we would flip a coin to decide which road to take.”
The group really doesn’t have a name but Snedecor said some are in tractor clubs like the Slow Boys Tractor and Engine Club or the Central Illinois Green Club. Many of the members met at previous tractor rides or events.
According to another enthusiast standing nearby who had been retired since 1997, “It’s a hobby for many of us and a great way to have fun and enjoy retirement.
“We want to keep the old iron going – restore the tractors and keep ‘em going,” said Snedecor.
The restored tractors in this group ranged in age from being built in the 1930s through 1960s. The tractors go about 15 miles an hour and the drivers try to take secondary roads on routes when possible.
One of the struggles they find with smaller areas, like Hardin County, is finding lodging that supports a large group of people who like to stay together on their adventures. They have big trucks that pull their trailers with tractors, so parking can be an issue too. The Cave In Rock Restaurant and Lodge was able to support this group with their needs. They all were able to stay in the lodging around the same area and eat at Kaylor’s Cave In Rock State Park Restaurant each day.
The group has traveled to places like the Black Hills and Mt. Rushmore in South Dakota; the Mackinac Bridge in Michigan; visited cheese factories and cranberry bogs in Wisconsin; and rode the Indiana Covered Bridge tour. They always stop if they see a tractor museum and have visited International Harvester and John Deere Assembly Plants.
Since it’s a sight we don’t see in Hardin County very often, the group gained a lot of attention during their rides and stops. Many photos were posted on Facebook. If they follow through with a second annual trip to Hardin County, they will surely be remembered!