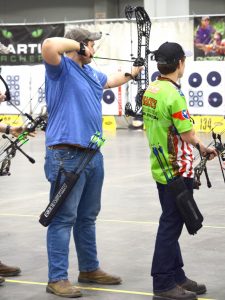 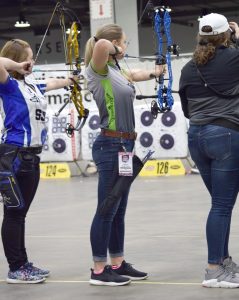 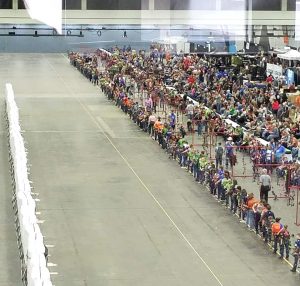 Adrianna Armstrong and Wyatt Dutton traveled to Cincinnati, Ohio to compete at the S3DA Indoor National Championship. The tournament is held annually at the Duke Energy Center and can accommodate over 450 shooters on the line at one time. The tournament had over one thousand students from all over the U.S. aiming for awards and scholarships.
“This is a great experience for the kids and a good way for the seniors to meet college coaches,” said Hardin County Archery Head Coach Susan Armstrong. At least eight college coaches were there to scout and give scholarships at the conclusion of the tournament.”
Dutton shot Thursday, March 14, at 2:00 p.m. and Armstrong shot at 5:00 p.m. High school rounds finished on Friday, March 15. Adrianna came away with a fourth place finish in High School Female Advanced Pins Class. Adrianna also competed in the National Field Archery Association’s Indoor National Championship on March 16 and March 17. She shot 60 arrows on Saturday and 60 on Sunday to complete her round. She placed fourth in the Bowhunter Freestyle Young Adult Female Class.
This finalizes the Cougars very successful indoor season, and they start outdoor 3D season on March 30th at NCOE.