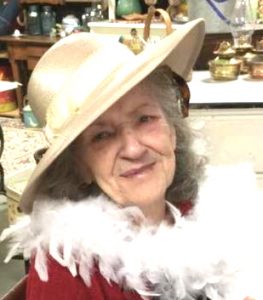 Anna V. Walker, 83, of Shawneetown, died Tuesday, February 26, 2019 in the Wabash Christian Village in Carmi. Anna was born in Cave In Rock, IL on August 29, 1935 to the late Alva and Anna (Milligan) Wolf. Anna was a member of the Church of God in Shawneetown.
Anna is survived by sons, Jim, Andrew, and Mark Bonneville of Shawneetown; daughters, Laura Bergeron of Omaha and Pam (Jim) Reed of Mt. Carmel; 18 grandchildren; 31 great-grandchildren; 1 great-great-grandchild; brothers, John Wolf of Tennessee and Leonard Wolf of Shawneetown; sister, Helen “Cricket” Jansen of Indiana; and sister-in-law, Charlene Wolf.
She was preceded in death by siblings, James “Speck” Wolf, Alva Wolf, Jr., and Shelby Baldwin, and a daughter, Mary.
A visitation was held on Thursday, February 28, 2019 from 4:00 p.m. to 7:00 p.m. at the Cox & Son Funeral Home in Shawneetown. Her funeral service was held on Friday, March 1, 2019 at the Shawneetown Church of God at 11:00 a.m., with visitation from 10:00 a.m. to funeral time. Rev. Randy Vaughn officiated. Burial was in Westwood Cemetery in Shawneetown.