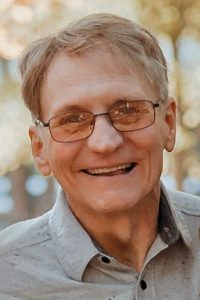 Danny Ewell Patton, 59, of Cave in Rock, IL went to be with his Savior while surrounded by his loving family on Wednesday, February 20, 2019 at Deaconess Hospital in Evansville, IN after a devastating accident.
Danny was born on September 6, 1959 to Rev. Cecil and Van Marie (Hall) in Rosiclare, IL. From the beginning, he was full of joy and mischief. He and his younger brother Dennis, often disguised as Captain America and Spiderman, were infamous in their ability to turn an adventure into trouble; like painting their freshly cleaned house top to bottom in mud while being chased by Mom with a broom.
Early in life, Danny had a strong desire to serve the Lord and fell in love with Southern Gospel music. He was a powerful preacher and could ring out a strong harmony with any song he heard. He sang and traveled with several Southern Gospel groups, including The Levee Pond Ambassadors, Freedom Crusade Singers, and the Honk Brothers, for many years.
While traveling locally with such a singing group, he met Linda Morton, who he pursued relentlessly for weeks until she agreed to just one date. The pair was married in June 1981 and remained a steadfast example of love and devotion for the rest of his life. They had two daughters, Mandy and Stephanie, who carry forward his legacy of music and love of Jesus.
Danny was a heavy equipment operator for Rigsby and Barnard Rock Quarry in Cave in Rock. In October 1986, Danny endured a terrible traumatic brain injury that would forever change his life and the lives of his family. But he overcame and continued to overcome, never losing his zeal for the Lord or his ability to praise the Lord in all circumstances, large or small, wonderful or devastating. He lived the first words he wrote when coming out of a coma, “I will gladly wait on the Lord.”
Danny loved to play his guitars and read his Bible for hours every day. He was a treasured member of the Leamington Community Church for over thirty years.
Danny took great joy in his family and would often pull out his wallet to proudly display pictures of his grandchildren, Sophie, Elaina, Henry, and Lucy, and tell anyone who would listen, “Hey, this Papaw has some fine grandkids.”
At any potluck, you could find Danny in the dessert line, always up for second or third helpings. When asked to choose between foods, he’d always pick both.
Above everything else, Danny loved the Lord. He served faithfully, never wavering. When his memory failed, Danny knew Jesus. And when his body failed, Jesus knew Danny and caught him up to his heavenly home.
Danny is survived by his devoted wife, Linda Patton of Cave in Rock; mother, Van Marie Patton, of Cave in Rock; two daughters, Mandy Patton of Harrisburg, Stephanie and Ryan Patton of Newburgh, IN; one brother, Dennis Patton of Franklin, TN; and four grandchildren, Sophie, Elaina, Henry and Lucy.
Danny is joining his father, Cecil Patton and son-in-law, Cody Armstrong, along with many other beloved family members in a joyous reunion, taking his spot in heaven’s eternal choir.
Visitation for Danny will be Saturday, February 23, 2019 from 4 to 8 p.m. at the Potters Church in Cave in Rock. Funeral services will be at the church on Sunday, February 24, 2019 at 1 p.m. with Rev. Lee Fricker officiating. Burial will be at the Cave Hill Cemetery near Cave in Rock. Vickery Funeral Chapel in Equality is in charge of arrangements. Internet condolences may be made at the website, www.vickeryfuneralchapel.com .