By Molly Parker, The Southern

The regional significance of fluorspar — known as calcium fluoride to chemists and just “spar” to those who mined it from the bowels of Southern Illinois — has been overshadowed by king coal, says author Herbert Russell.
Russell set out to change that. His new book, “Fluorspar Mining: Photos from Illinois and Kentucky, 1905-1995,” was recently published by the Southern Illinois University Press. By adding new insights to this forgotten mining history, the book pays homage to the men who braved darkness, and at times peril, on the job.

In this Q&A, Russell explains why he set out to write about this purple gem that drove the economy of parts of southernmost Illinois along the Ohio River valley for decades, and what he learned about it along the way.
1. What made you want to write a book about fluorspar mining?
I developed an interest in this region after coming to SIU for a master’s in English. Following time in the service, I returned to complete a doctorate and decided to make the area my home. One of my most interesting jobs came at the SIU Coal Research Center, where I was an editor and writer for four years. This experience gave me a basic understanding of mining and later resulted in an invitation from the SIU Press’ James Simmons to edit a collection of photos taken by SIU professor “C. William Horrell of Anna. The result was “Southern Illinois Coal: A Portfolio,” published in 1995.
The area known as “Egypt” is so different from the rest of the state that I eventually published a book highlighting that fact, “The State of Southern Illinois: An Illustrated History,” published by the SIU Press in 2012. While researching that book and the fluorspar mines in southeastern Illinois, I noticed that the mines and miners were usually represented by only one photo — that of an underground drilling machine and an operator with his back to the reader.
I felt it was time for a more detailed pictorial record of this industry that had flourished on both sides of the Ohio River from the mid-1880s to 1995.
2. Where was fluorspar mined in this region? How is/was it used?
Fluorspar was mined principally in the Illinois counties of Hardin and Pope and in the Kentucky counties of Crittenden and Livingston. All four counties front on the Ohio River, which …. Click here to read more 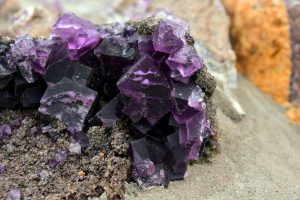 Photo by Richard Sitler, The Southern