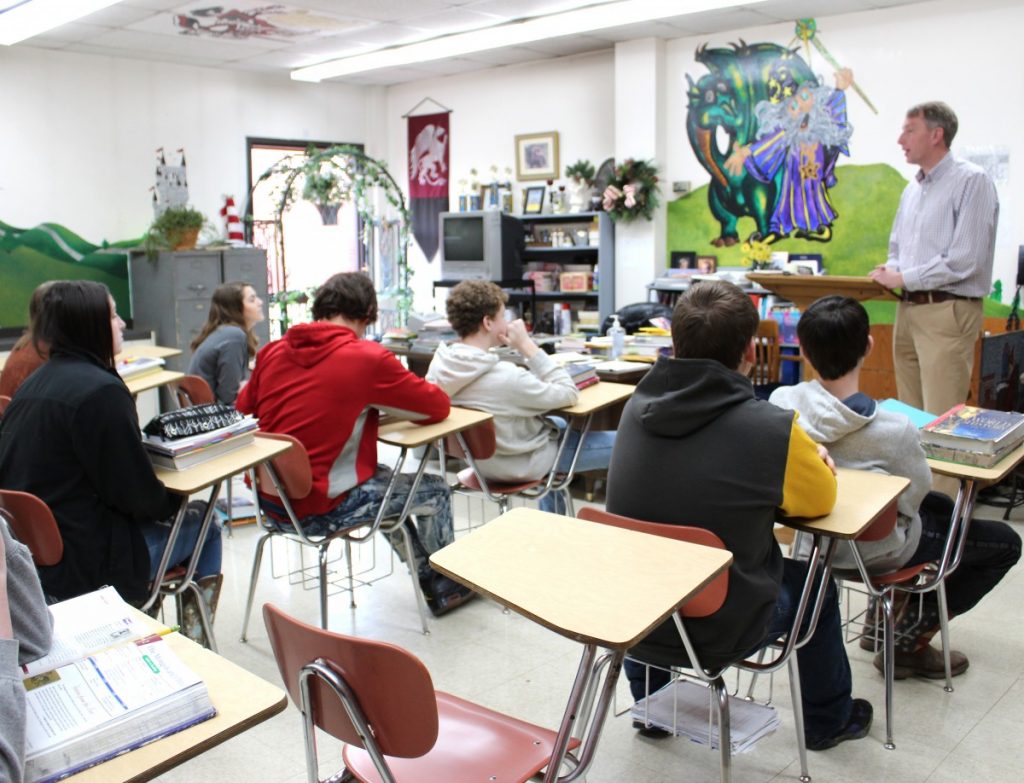 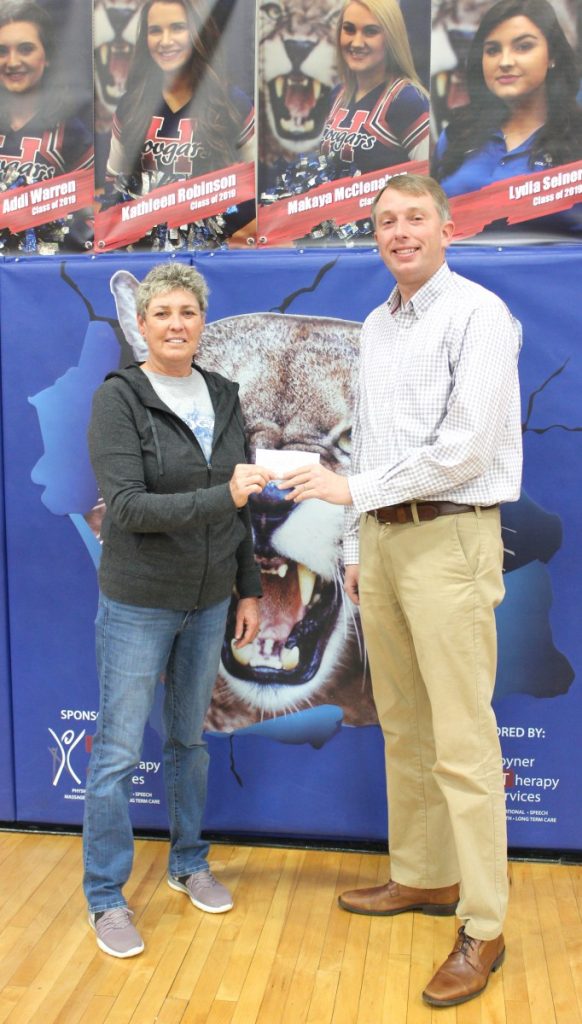 118th District State Representative Patrick Windhorst visited Hardin County School Monday, January 28 to present a $300 donation to Hardin County High School Athletic Director Sharon Austin. The donation is intended to help fund Class 1A Basketball Regionals which will be held at Hardin County School Oxford Gymnasium beginning Monday, February 18. The money will go towards workers, food, hospitality room and janitors. Many area businesses have promised to donate and this will help make Regionals a success, alleviating the school from much of the cost.
Windhorst sat down with me and spoke about some of his thoughts and goals as serving as State Representative for the 118th district. He was recently sworn in on January 8 and had a couple of weeks in district to get set up. He will be back in session beginning this week until the end of May, with a couple weeks of spring break in between. He realizes there is a lot of work ahead and he will be learning along the way.
One area of concern that Windhorst shared with me is that Illinois, southern Illinois in particular, is losing its population. He wants to look at ways to reverse the trend. He feels that the economic climate and taxes are part of the cause, and raising taxes isn’t the solution. Windhorst said if we improve our business climate and reduce taxes, those would be a couple of major steps in the right direction. He feels that education plays a large role in the population decline. He says that Illinois loses 40-50% of high school seniors because they go out of state for college, and a large percent don’t come back. Windhorst said we need to provide affordable post-secondary education and vocational training that matches students with jobs that are within our economy.
We spoke about the negativity or stigmas that become attached to counties with challenges like Hardin County. “I think it’s important to not to be pessimistic or negative, but it’s also important to be realistic,” said Windhorst. “We do have challenges that we have to address. The state is putting a lot of burdens on us that are making it hard for us to compete with Kentucky, Indiana, and Missouri. You know, it may work fine for Chicago, but it’s not working for southern Illinois. Hopefully I can convince some people in Springfield that those changes are necessary.”
While visiting that day, Rep. Windhorst was introduced to various teachers and students throughout the school. He took the opportunity that morning to hear concerns from all ages. Windhorst visited several classrooms, including both Ms. Jolene Fowler’s American History and World History classes, Mr. Ian Jones’ Civics class, and Mr. John Hall’s Ag class.
I was able to join Windhorst in Ms. Jolene Fowler’s World History class, where he opened up the room for conversation and questions after introducing himself and his role as State Representative. High School Senior Jonathan Foster started the discussion with a question asking Windhorst how he felt about gun control. Windhorst shared that he was a strong supporter of the 2nd amendment of the constitution. Windhorst shared that gun control was one of the big issues that would be discussed in Springfield. “Unfortunately, my view is in the minority in the General Assembly,” said Windhorst. “Most people in the General Assembly believe guns are a problem. They don’t understand why someone would want to possess a weapon. They just don’t get it.”
Windhorst shared that he has put forth some legislation, one to eliminate the FOID Card registration. He said that Illinois is the only state that requires it in this country. Even though his legislation may not pass, Windhorst says he is doing his job representing views of southern Illinois and making them known to Springfield. He added that when a bill is put forward hopefully it gets debate and discussion so that a reasonable and rational decision can be made.
Other topics raised and discussed by the World History students with Windhorst were: ways to combat opioid and methamphetamine addictions, increasing funds for schools, gasoline taxes, and legalizing marijuana.
Windhorst believes that legalizing marijuana is a mistake. He said that legalizing it may generate money, but heavy use of marijuana is thought to be associated with increased mental illness. Because of a potential need for an increase in social services, he feels it would cause more problems and cost more money than providing a financial solution for Illinois.
Windhorst also heard concerns from the school resource officer and other staff who have conceal carry permits (not associated with the school). Recently with 911 address changes, citizens who have attempted to change their addresses on their conceal carry permits found that it would cost them $75 just to make the change. Windhorst said that he would check into it and see if the fee could be adjusted and determine if it is just a glitch or a mistake with the system.