Shawnee Communications kicks off the new year with donation to local charity.
On Wednesday, January 9, 2019, Andy Henderson, Marketing Manager for Shawnee Communications, presented the “Friends of the Library” (Rosiclare Memorial Public Library) with a much needed donation. In addition to employee contributions, the $7,080 donation included an extremely generous donation from an anonymous Shawnee retiree in the name of Shawnee’s late President, James T. Coyle. All donations were matched individually by Shawnee’s four shareholders and by the company. On hand to receive the donation were Friends of the Rosiclare Library members Alice Parker and Nina Ferrell.
Library representatives were thrilled by the donation, stating that the donation will help them address immediate needs. “We were speechless”, said Mrs. Parker. “Rural institutions always operate on tight budgets, but a donation like this breathes new life into an organization and paves the way for improvements. We are so thankful to everyone who helped make this donation possible”.
Mr. Henderson added, “Shawnee gets really excited about making donations like this! Being able to give back, makes a positive impact and help strengthen our community is extremely important to us. ”
A similar donation was also made to Lovington Public Library, which is located in Lovington, IL.
Editor’s note: Friends of Libraries are non-profit, charitable groups formed to support libraries in their communities. 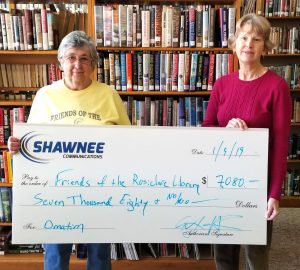