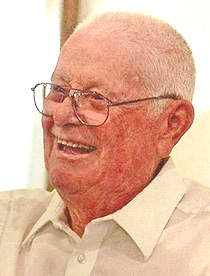 Rev. Cecil Thurston Patton, 87, of Cave-in-Rock, IL, passed away surrounded by his devoted family on Sunday, December 2, 2018 at the Baptist Health in Paducah, KY. Cecil was born on May 6, 1931 in Cave-in-Rock, the son of the late Lawrence Thurston and Ula (Reed) Patton. He married Van Marie Hall on December 2, 1955, and he passed on their sixty-third anniversary.
Cecil was a faithful member of the Leamington Community Church. He was a proud Army veteran of the Korean Conflict and member of the National Rifle Association.
Cecil is survived by his loving wife, Van Marie Patton of Cave-in-Rock; two sons, Dennis Patton of Franklin, TN, Danny and Linda Patton of Cave-in-Rock; two brothers, Garcia and Thelma Patton of Xenia, OH, Billy Patton of Benton, KY; one sister, Ethna and Bill Joyce of Alton; six grandchildren; and six great-grandchildren.
Cecil was preceded in death by his parents; two brothers; and four sisters.
Visitation for Cecil will be held on Thursday, December 6, 2018 from 5 to 8 p.m. at the Leamington Community Church near Equality. Funeral service will be held the next day at the church, Friday, December 7, 2018 at 1 p.m. with the Rev. Lee Fricker, Rev. Arthur Austin Jr., and Rev. Marshall Glover officiating the service. Burial will be at Cave Hill Cemetery near Cave-in-Rock.
Donations in Cecil’s memory may be made to the Leamington Community Church, Cave Hill Cemetery, or the Myasthenia Gravis Foundation. Vickery Funeral Chapel in Equality is in charge of arrangements and internet condolences may be made at the website, www.vickeryfuneralchapel.com .